Legislation aimed at infrastructure and social programs also includes big changes in energy, transportation and disaster preparation. They would amount to the most significant climate action ever taken by the United States.

WASHINGTON — President Biden has framed this moment as the country’s best chance to save the planet.

“The nation and the world are in peril,” he said weeks ago in Queens, where 11 people drowned in their basement apartments after floodwaters from Hurricane Ida devastated communities from Louisiana to New York. “And that’s not hyperbole. That is a fact. They’ve been warning us the extreme weather would get more extreme over the decade, and we’re living in it real time now.”

Mr. Biden’s plan to try to fortify the United States against extreme weather — and cut the carbon dioxide emissions that are heating the Earth and fueling disasters — is embedded in two pieces of legislation pending on Capitol Hill. The future of both bills remains in question, with tension between moderate and progressive Democrats over the size and scope of many details.

Together, they contain what would be the most significant climate action ever taken by the United States. If Congress fails to pass major climate legislation now, it could be years before American political cycles afford another opportunity — a delay that scientists say the planet cannot afford.

The climate provisions are designed to quickly transform energy and transportation, the country’s two largest sources of greenhouse gases, from systems that now mostly burn gas, oil and coal to sectors that run increasingly on clean energy from the sun, wind and nuclear power.

The impact will touch a broad cross-section of American life, from the kinds of cars that Americans drive, to the types of crops grown by farmers, to the way homes are heated and buildings are constructed. One measure could shutter virtually all of the nation’s remaining coal plants, forcing sweeping change in communities dependent on mining but also, one study estimated, preventing as many as 50,000 premature deaths from pollution by 2030. And other measures would provide billions to replant in national forests, repair trails for hikers and clear brush to reduce the risk of wildfire.

“Each time you let these opportunities slip through your fingers, you’re passing a much harder problem on to the next generation,” said Kim Cobb, a climate scientist at the Georgia Institute of Technology and mother of four. “It’s a very hard thing to swallow that we are relegating children born today and not yet born to a future of dangerous climate impacts.”

A truck sprayed the remains of downtown Greenville, Calif., which was demolished by the Dixie Fire last month.Credit…Josh Edelson/Agence France-Presse — Getty Images

The United States has contributed more to global warming than any other nation, and the action it takes will be felt well beyond its borders. Falling short would hamstring Mr. Biden next month, when he is expected to attend a major U.N. climate summit in Scotland to try to convince other world leaders to take stronger climate action.

“The whole world is watching,” said Rachel Kyte, dean of the Fletcher School at Tufts University and a climate adviser for the United Nations Secretary General. “If these bills don’t come to pass,” she said, “then the U.S. will be coming to Glasgow with some fine words” but “not much else. It won’t be enough.”

As part of the 2015 Paris climate agreement, nearly 200 nations agreed to try to limit global warming to below 2 degrees Celsius, compared with temperatures before industrialization. That’s the threshold beyond which scientists say the dangers of global warming — such as deadly heat waves, water shortages, crop failures and ecosystem collapse — grow immensely.

But the world is way off track to meet that goal. As countries continue to pump carbon emissions into the atmosphere, the Earth has already warmed about 1.1 degrees Celsius. Nations must cut in half emissions by the end of the decade to avoid the most catastrophic effects of warming, and start that change immediately, scientists say.

Mr. Biden has pledged to reduce U.S. emissions at least 50 percent below 2005 levels by 2030 but his ambitions are constrained by razor-thin Democratic majorities in the House and Senate and the fate of the twin bills.

The first piece of legislation, a $3.5 trillion budget package proposed by House Democrats, has been a focal point of debate because it is filled with social programs including free community college, paid family and medical leave and expanded Medicare.

But it also contains hundreds of billions in tax credits for companies that build wind and solar power or retrofit polluting facilities to capture and bury their carbon dioxide emissions before they enter the atmosphere. And it expands tax incentives for Americans to buy electric vehicles, giving consumers as much as $12,500. It would also penalize oil and gas companies if they leak methane, a potent greenhouse gas.

The most potent climate measure in that legislation is a $150 billion Clean Electricity Performance Program, which would reward utilities that generate an increasing amount of electricity from wind, solar, nuclear, or other clean energy sources and penalize those that do not. The policy aims for the United States to get 80 percent of its electricity from sources that don’t generate carbon dioxide by 2030, up from 40 percent today.

“If that came to pass, it would easily be the biggest thing Congress has ever done on climate,” said John Larsen, a director at the Rhodium Group, an energy research and consulting firm. In a recent study, Mr. Larsen found that the biggest climate provisions would only get the United States halfway to Mr. Biden’s emission pledge. But, he said, “getting halfway there in just one bill would be huge.” 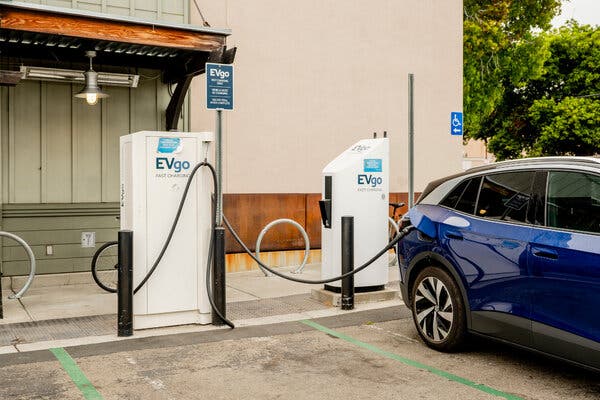 Legislation pending in Congress would give tax credits to consumers who buy electric vehicles.Credit…Cayce Clifford for The New York Times
Image

Children played as steam rose from a coal-fired power plant in Adamsville, Ala., this spring. Legislation pending in Congress would reward utilities that switch from coal to solar, wind and nuclear energy.Credit…Andrew Caballero-Reynolds/Agence France-Presse — Getty Images

It could transform states like Florida, Mississippi and Alabama that are still dominated by fossil fuel power plants.

“A policy like this would really have an outsized impact in the Southeast,” said Maggie Shober of the nonprofit Southern Alliance for Clean Energy. “We’re generally lagging behind on clean energy.”

The second big bill in Congress, a $1 trillion infrastructure plan has bipartisan support. It would provide the largest single infusion of money to prepare communities for extreme weather fueled by climate change that is already underway. It includes $47 billion over five years in resilience funding to improve the nation’s flood defenses, limit damage from wildfires, develop new sources of drinking water in areas plagued by drought and relocate some communities away from high-risk areas.

The bill comes after a record hot summer in the United States in which cascading disasters affected nearly every corner of the country: Overflowing rivers in Tennessee, a hurricane that dumped record amounts of rainfall and left a swath of destruction from Louisiana to New York, a heat wave that killed hundreds in the Pacific Northwest, wildfires that blazed across the Sierra Nevada range, pumping so much smoke into the air that it was hazy in Boston.

The infrastructure bill would shift America’s approach to dealing with climate threats that can no longer be avoided. Instead of frantically reacting after disaster strikes, the country would better prepared to reduce damage.

“We’ve been telling lawmakers for a long time that climate change could further strain fresh water supplies in the West, and that we need to plan ahead before it’s a crisis,” said Dan Keppen, executive director of Family Farm Alliance, which represents farmers, ranchers and irrigation districts across 17 Western states.

This summer, as the worst drought in memory baked the American West, Mr. Keppen saw those dire warnings unfold. An irrigation district in Oregon had to shut off water in the summer before crops were ready for harvest at local vineyards and orchards. Ranchers in California had to ship their cattle away because there was no forage left.

Mr. Keppen said the infrastructure bill, which contains $8.3 billion in funding for water projects, could make a big difference, by upgrading water storage and funding conservation measures. “If we had done this 20 years ago, I think we would be much better prepared for this year’s drought,” he said. “The one silver lining of this year’s drought is it really drew attention to the problem.”

A drought-stricken field in Klamath Falls, Ore., in July. The American West is in the middle of a multi-year megadrought made worse by climate change. Credit…Nathan Howard/Associated Press

Farmworkers in Talent, Ore., dismantling a pear orchard that could not be sustained in this summer’s drought.Credit…Jordan Gale for The New York Times

“Too often, for so many of us, climate change feels like there’s not a damn thing we can do about it to stop it,” said Donnel Baird, who runs BlocPower, which aims to convert gas and oil heating systems to green electricity, particularly in low-income communities. “But no, we can actually green all of America’s buildings.”

Still, there is no guarantee that even the infrastructure bill will pass. Many House Democrats have said they will not vote for the legislation unless it passes in parallel with the reconciliation bill that aims to address the root causes of global warming.

Environmentalists fear that if Democrats in Congress can’t reach an agreement on the legislation this year, it could be the last chance for major climate action in a long time as the party could lose control of Congress in the midterms next fall. While many Republicans approve of funding for climate resilience, they have shown far less support for federal action to slash emissions.

How hot the world ultimately gets will depend on many factors — including how other big polluting countries like China and India handle their emissions. Even so, scientists say, the chance to constrain global warming to about 1.5 degrees or at least below 2 degrees is growing dim.

“Even if the window for 1.5 degrees slams shut, it’s still going to be worth doing everything we can to limit as much additional warming as possible,” said Michael Oppenheimer, a professor of geosciences at Princeton. “Every fraction of degree of warming leads to additional damages and risks.”

Delay is not an option, Mr. Oppenheimer said. “We’ve been doing that for 40 years and now we’re finding out firsthand what that means,” he said.

Brad Plumer is a climate reporter specializing in policy and technology efforts to cut carbon dioxide emissions. At The Times, he has also covered international climate talks and the changing energy landscape in the United States. @bradplumer

Winston Choi-Schagrin is a reporter covering climate and the environment. @winstonc_s

Keep up with the latest news, trends, and the prominent water issues impacting Western farms and ranches.

This report outlines and highlights the many accomplishments and activities of the Family Farm Alliance in 2020. The annual report is disseminated...

Final Report on Perceptions of Demand Management in Western Colorado

The Nature Conservancy has commissioned a report exploring the perceptions of demand management on Colorado's West Slope. It is intended to help...